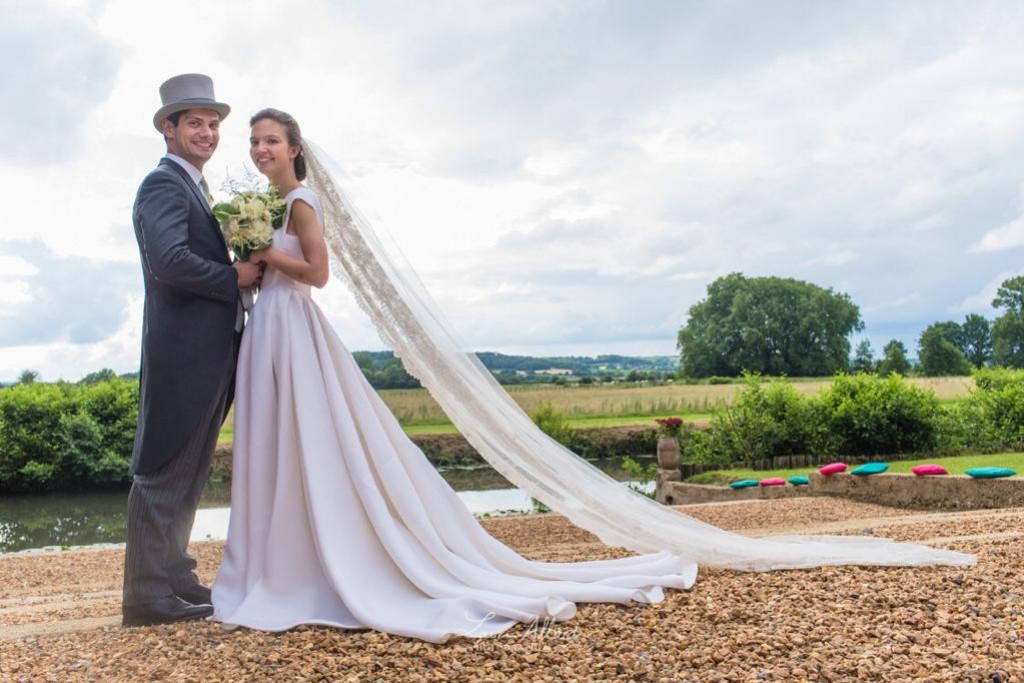 Welcome to this blog to our very dear customers who have agreed to tell us behind the scenes of their wedding.

Who does not dream of gleaning some good plans before D-Day?

Discover a designer wedding canon, find a good photographer or find good theme inspirations to have the perfect procession…

Les petits choux think of you and circulate the information!

This is the start of a series that we hope will grow thanks to your testimonies.

Thank you for agreeing to tell us about your wedding.

My name is Annah, I am 24 years old, I live in Paris and I am a product manager at Salins du Midi. I met my husband when I was 15, on the school benches.

At what time of year did your wedding take place?

We were married civilly on 9 July and religiously on 10 July.

We got married in Cherreau (in the Sarthe) in the little church where my parents and my aunt were married. Then the reception took place in my grandparents' house, where François had proposed!

How long did you have to organise all the preparations?

François proposed to me in May and we got married a little over a year later in July. But after 8 years I already had a lot of ideas in my head!

What made the preparations really easy was that both families got along very well and always agreed. In addition, and I really thank them again for this, we were able to choose what we wanted. I also did a lot of things manually and it was a very good time. The least easy part was surely the choice of flowers, because flowers are obviously weather-dependent, and also because I really didn't know this subject!

The least easy part was surely the choice of flowers, because flowers are obviously weather-dependent, and also because I really didn't know this subject!

What impact did COVID have on the preparations?

We were extremely lucky, as on the day of the wedding Covid was almost non-existent (apart from the masks in the church). However, during the preparations we had given a lot of thought to the different possibilities of gauges, whether we could have an outdoor mass (the answer is yes, but you need permission)... Nothing too bad, but it forced us to think of alternatives, for an event that is already complicated enough to plan!

Did you have a theme or a colour?

We chose green as our wedding colour. It was more about having a common thread than anything else. For example, I added a lot of pink accents because I thought green by itself was a bit sad. We chose the colour green because of the groom's and the witnesses' ties. As for the theme, I wouldn't say there was one in particular, although trees were quite prominent. We just named our tables after trees, and tried to highlight the park at my grandparents' house. 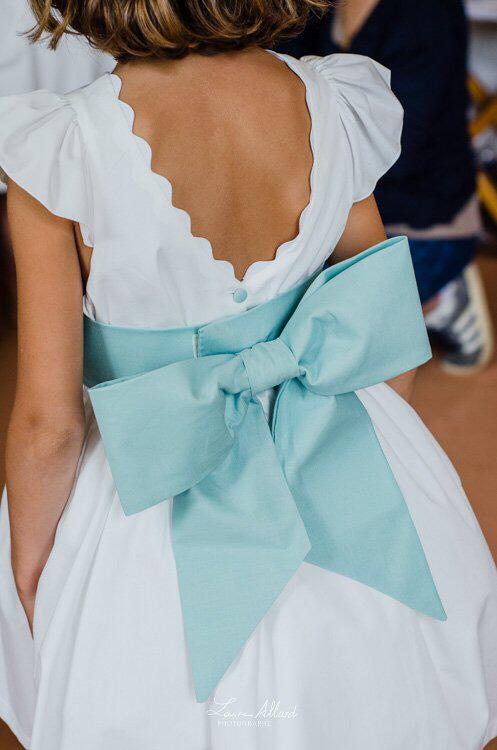 Was it easy to choose your dress? quel créateur ?

When shopping for wedding dresses, I found it extremely hard to plan. On the one hand because I couldn't really imagine myself in the dress on the day, but also because in the shops they usually only offer one or two sizes to try on, which are either too big or too small, so it's hard to imagine. I then went to a dressmaker in Paris, who was really the one who guided me, because I was a bit lost. But even then, it's still hard to imagine!

Did you have honorary children?

Which model(s) did you choose ?

The Cleophée dress with its V back, customised with its wave croquet and short ruffled sleeves, not forgetting the big green bow. My bridesmaids also wore a pretty white flower crown. Our little groomsmen were dressed in the Aladdin collar shirt, green shorts and a green belt. So cute.

Did you take a photographer for the day?

Yes we had a great photographer, Laure Allard. I would recommend him 100% of course. Even though I'm not a big fan of photos, it's still a moment you want to remember for the rest of your life.

What special arrangements did you make to reassure your guests?

We had sent an email to ask people who had not been vaccinated to get tested, but I must admit that we were very lucky, no cases were reported!

Did you have an entrance music for the dinner? if yes, which one? why this choice ?

Our music was chosen at the last minute because we couldn't decide, and in retrospect it was something that really stood out to our guests. We chose Scatman and it set a great mood! We chose it because it was very rhythmic and without words, so even those who didn't know it could dance without any problem!

What was the outcome of this unique day?

A day that started in the rain but was as magical as we had planned. I think that everything had been planned down to the last detail in our image and that's what made it wonderful.

breakfast in bed with my witnesses, leaving the church, the evening once everything was over: no more stress!

If you had to do it again, what would you do differently?

We would have planned more time to take nice pictures with my husband and family and I would have dressed up with my witnesses.

WHAT KIND OF MARRIAGE ARE YOU?